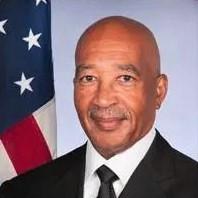 In September 2013, he was nominated by President Obama to serve as the United States Ambassador to the Council of the International Civil Aviation Organization (ICAO), a UN specialized agency, a position that Commissioner Lawson held from July 2014 to January 2017. The 36-members of the ICAO Council set the standards and recommended practices and policies in support of the international civil aviation sector worldwide.

Before serving as the US Ambassador to ICAO, Commissioner Lawson served on the Board of Airport Commissioners (BOAC) for Los Angeles World Airports from 2005 through 2011 and as President of the BOAC from 2008 – 2011. During his tenure, the Board was responsible for the overall management of the system of airports under its control, including Los Angeles International Airport, LA/Ontario International Airport, and Van Nuys Airport.

From 1980 to 2011, Commissioner Lawson practiced law at the prestigious international law firm Skadden, Arps, Slate, Meagher & Flom LLP in their New York and Los Angeles offices until his retirement in 2011. Skadden is one of the largest law firms in the world with 1,700 attorneys in 22 offices around the world. The firm specializes in mergers and acquisitions, litigation, and other practice areas. The M&A Journal named Skadden “Law Firm of the Year” in its April 2010 issue. Skadden also received the magazine’s top recognition in 2009. He led the Executive Compensation and Benefits Group in the Los Angeles office; worked in all facets of executive compensation and benefits matters, including stock options and other equity-based compensation arrangements, tax-qualified and non-qualified pension plans, fiduciary responsibility, structured finance transactions, bankruptcy proceedings, and proxy contests. Chambers USA consistently recognized Lawson as one of America’s Leading Lawyers for Business.

Commissioner Lawson received his Juris Doctorate from Harvard Law School in 1978 and his BA in Political Science and Economics from Loyola Marymount University in 1975. He is admitted to and continues to be a member in good standing of the following bar associations: New York; District of Columbia; and California.

During Commissioner Lawson’s professional career, he has held positions of significant responsibility on several charitable, educational and administrative boards, and committees including: