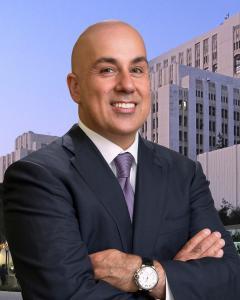 Pedram Salimpour serves as Chairman, CEO and co-founder of Pierce Health Solutions, a California based company focused on the creation of novel health delivery systems for large employers throughout the United States.  Pedram also serves as a three-time appointed Commissioner of the Los Angeles Fire & Police Pensions Board, managing over $25 billion in assets.

In 2005 Pedram Salimpour co-founded CareNex Health Services, a healthcare technology organization specializing in neonatal disease management with presence in over 40% of Neonatal Intensive Care Units in the United States. In 2013 CareNex was wholly acquired by Anthem, Inc. In 2006 Pedram acquired Alvarado Hospital in San Diego from Tenet Health Care and co-founded Plymouth Health which owned and operated the medical center until 2010. In 2012, Pedram co-founded Boss Surgical Group, an ambulatory surgery center organization with locations throughout the US.  BSG was acquired by Verity Health in 2017.

Pedram has co-authored major grant awards from the National Institutes of Health as well as dozens of peer-reviewed scientific publications and was a co-investigator on the research that brought to market sildenafil citrate (Viagra). He serves as a member of the Dean’s Board of Advisors at Boston University School of Medicine, the Board of Directors at the UCLA School of Public Health, and is Chairman of the Board of Directors of the Discovery Science Museum in Los Angeles as well as multiple corporate boards of directors.

A regularly invited speaker at national and international conferences, Pedram most recently served as keynote speaker at the Annual Scientific Colloquium at the Whitehead Institute at MIT.   Pedram’s interviews and editorials have been published in the Los Angeles Times, the New York Times, GQ, Newsweek, der Spiegel, the London Daily Telegraph, and other publications throughout the world.

Pedram received his medical degree from Boston University School of Medicine, where he was named both an Alpha Omega Alpha National Research Scholar and an Alpha Omega Alpha National Honor Medical Society Member. He is the first ever two-time recipient of the American College of Physicians’ Research Award. His residency training was completed at USC Medical Center. Pedram received his Masters in Public Health from the Fielding School at UCLA.